“The company is an important contributor to the Middleport and eastern Niagara County economies; that economic contribution is set to grow as FMC makes major investments in new employee hiring, product offerings and capital improvements at the Middleport plant,” the proclamation stated.

Plant Manager Brent Sensenich is looking to hire seven new employees, increasing the plant’s workforce to over 70, to meet global demand for agricultural science products to protect and increase food supplies. The Middleport plant formulates and packages a number of key product lines to protect over 100 crops in more than 75 countries worldwide.

“We appreciate very much Sen. Ortt’s support for industrial facilities and his encouragement on our 75th anniversary as we continue to work hard for the betterment of our local community and to provide sustainable employment opportunities in our region,” Sensenich said.

The proclamation recognized that “FMC is also committed to the safety of its employees, with ongoing safety training to keep workers safe at home and on the job; that commitment has enabled the Middleport plant to go more than two years as an accident and injury-free workplace without an OSHA recordable incident.”

Regarding environmental goals, FMC announced in August the goal to achieve net-zero greenhouse gas emissions by 2035 and will use science-based targets aligned with keeping the global temperature at one-and-a-half degrees Celsius above pre-industrial times. 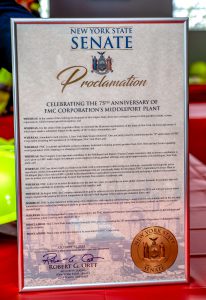 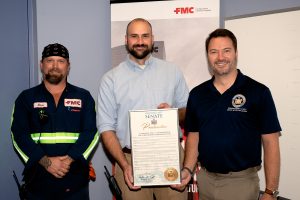