The scholarships were awarded to Abigail Ander of Gasport and Madison J. Ohol of the Town of Royalton based on their submission of a 300-word essay with the main focus on “picking an experience from your life and explaining how it has shaped you for the career you have selected.”

“FMC, a company dedicated to our local community, is proud to honor these two outstanding Roy-Hart graduates with scholarships and extends our best wishes for continued success in their future academic studies,” said Brent Sensenich, FMC Middleport plant manager.

Abigail Ander was selected and participated in Leadership for the Youth of Niagara County (LYNC) and served as a captain of the school’s varsity field hockey team and as class secretary. She will be studying nursing at the State University of New York (SUNY) at Brockport.

Madison Ohol was a member of Roy-Hart’s varsity swim team and school band, and participated in the Niagara County Legislative Intern Program. She plans to study nursing at Niagara University.

Brent Sensenich (right), FMC Middleport Agricultural Sciences Plant manager, presents one of the two $1,000 scholarship checks awarded to Royalton-Hartland graduating seniors Madison Ohol of the Town of Royalton (second from left) and Abigail Ander (far left) of Gasport. The scholarships were awarded based on their winning essay submissions on the theme: “picking an experience from your life and explaining how it has shaped you for the career you have selected.” Both graduates will be pursing nursing studies in college. 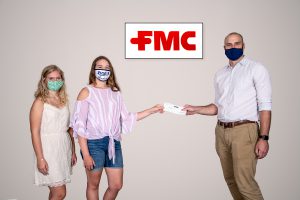