FMC Corporation, with approval from the governmental regulatory Agencies (USEPA, NYSDEC, NYSDOH), conducted an Interim Corrective Measure (ICM) in 2011 on a property in the Village of Middleport.

The property was within the Culvert 105 Study Area, which was evaluated as part of FMC′s Corrective Measures Study (CMS). This 2011 ICM was undertaken while the CMS process continued.

The ICM involved the excavation of surface soils that contained elevated levels of arsenic on two lots on a proposed subdivision located north of Sleeper Street in Middleport, construction of a portion of a proposed 50-foot wide road for the subdivision and adjoining utility easements, and construction of a portion of the proposed utility corridor between the proposed road and N. Hartland Street. ICM work was performed from late August until early to mid-October 2011 with weather permitting.

Project activities included surveying to establish property boundaries, excavation areas and elevations, soil sampling and analysis, establishing erosion controls, clearing surface vegetation, soil excavation, backfilling with clean soil and/or stone, installation of a temporary buried culvert for the segment of the current open ditch section of Culvert 105 across the utility corridor, and restoration of the area.

Dust monitoring on the work site was conducted continuously during soil removal activities to ensure that dust levels were within acceptable limits for both on-site workers and residents. Dust suppression techniques were used whenever activities that might create any airborne dust at the excavation areas occured. Air monitoring was also performed during all soil excavation, handling, and/or removal activities.

Excavated soils were a non-hazardous waste and were transported by truck to and placed in an approved area on the east side of the FMC Plant Site where similar materials from past remediation projects have been placed. The excavated soils were covered with clean soil or temporarily covered with plastic sheeting at the end of each work day and graded to promote drainage. At the completion of the 2011 ICM, the approved area was covered with clean soil and revegetated in accordance with a plan approved by the environmental regulatory Agencies to protect human health and the environment. 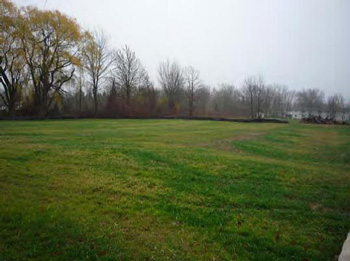